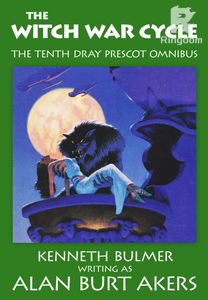 On the magnificent and mysterious, beautiful and terrible world of Kregen, a planet orbiting Antares four-hundred light-years from Earth, much may be achieved and much lost. Far more than merely a strong sword arm is required for victory. Far more than a cunning and devious brain is needed to secure success.

The island Empire of Vallia, sundered by internal dissension and invasion, is gradually reestablishing itself after the Times of Troubles, but the grouping of continents and islands called Paz are threatened by the Shanks, fish-headed reivers from over the curve of the world. Dray Prescot’s task is to unite all of Paz in alliance against the aggressors, but not all the people of Paz are willing to forget their old enmities. But in the passionate, shrewd, charismatic figure of Delia of Delphond, and his family and blade comrades, Prescot possesses riches past the mundane dreams of empire.

Werewolves of Kregen:Having at last returned to his home empire, to his wife and his friends, Dray Prescot will learn that the vengeance of his defeated enemies has unleashed nine occult curses against Vallia. The first curse, the plague of murderous werewolves, takes Dray by surprise. Could his valor and courage stand up against an unprecedented onslaught of warring witchcraft?

Witches of Kregen:When his new army was ready to march against the witch hordes, it rained frogs! That's the sort of thing Dray Prescot is up against in the war of the Nine Unspeakable Curses! He was struggling to gather together his shattered empire when the witchcraft hit. But he has wizards on his side, too, and very soon it becomes a battle of sheer courage, quick wits, and fast flying.

Storm over Vallia:Drak, Crown Prince of Vallia, Dray Prescot's son, was sore beset on three sides. For one, he was leading an army of liberation against the usurper Alloran who had seized part of Vallia.For two, he was the target of a marriage plot by an allied queen, whose forces he needed desperately. For the third, he was in love with Silda, daughter of his father's loyal friend, Seg the Bowman. And Silda was now in Alloran's camp...

Omens of Kregen:Dray Prescot must conquer the bloodthirsty forces of the would be king of North Vallia, while at the same time protecting the realm from the evil witch Csitra. Journeying to the witch's dark Maze of Coup Blag, Dray and his comrades must meet the challenge of this realm of traps and treasures, where death waits around every turn, and a wizardly battle of destruction is the price of winning free...

Warlord of Antares:His empire endangered by the diabolical schemes of Csitra, Dray Prescot has been summoned by the powerful Star Lords who warn of a dread menace approaching from the South. Dray must take on all challengers to become the Warlord of Kregen, uniting his people against the dual threat of Csitra's deadly magic and a seemingly unstoppable invasion by the Shanks...

This edition contains a glossary to the Witch War cycle.

[1] Dustrectium. Firepower as applied to the effects from archery, slings and engines.

[2] K.S.: Krell Stylor. Krell is one Kregish word for Chief.