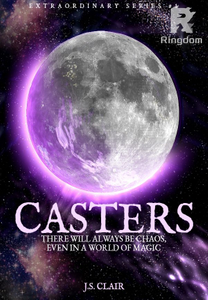 "Yes, we are casters. We were only called witches by the townsfolk who do not believe in magic and sees them as the evil lurking in this world." Aunt Grace told Charlotte.

Charlotte is a young woman who grew up in Gatlin, South Carolina with her sister, Matilda, and her aunt. She was living a normal life until they moved to settle down in Roussillon, Frace with the rest of her family. This is where she met Steven, her first love. As she slowly notices the peculiar changes within the home and being recognized by the townsfolk of Roussillon, she found out that she has been living in the shadows of her real identity. Not only has she been living a lie, but she has to face the evil dark caster in the history of magic- Gideon.

As the world lives in harmony with the ordinary and gifted - ordinary humans, casters of different types, ordinary living creatures, and even the creatures that are seen by the gifted, this balance would depend upon the choices of the young Charlotte.

Her battle with Gideon will soon end up as a choice of ending the historical curse to rebuild this balance, or reuniting with the entity Gideon has captured- her father.

Months after the war in the lovely home of Alarie, Charlotte was sitting by the window, enjoying the breeze and the view. What she once hated is now the town she loved. She would most probably regret it if she would have settled back in Gatlin. Charlotte, who was alone with her thoughts, was then interrupted by a knock on the door.