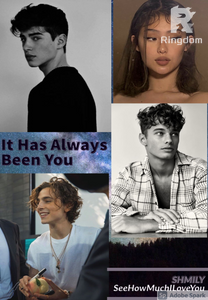 It Has Always Been You

Elena is just a nineteen-year-old girl who is excitedly stepping into her college life. Although she has a pretty and sparkling appearance, she possesses many bruises on her teenage heart and sensitive self-esteem.
She had a bitter past. Which she never wanted to let anyone in her college find out about her past self, who was over-weight, doubtful, and ugly. She was scared about her own past when she was full of self-doubt and depression.
But what will happen when she bumped into her first love Caspian, back when she was still in school, who was also her not-so-close friend back then. She kept trying to ignore him, scared that he might reveal her secret to everyone who admires her present self. But from fate, they kept bumping into each other. Although she had feelings for him, she just wanted to give them up and move on because he deeply hurt her. Even Caspian ignored him whenever they bumped into each other. Back in school, Caspian was a playboy. He dated many girls, Elena never dared to confess to him. Neither did he ever felt the nervousness in her whenever they talked in school. But when she did, she was rejected traumatically.
But now, as they kept bumping into each other in their most awkward moments, they had no choice but to talk. While Elena kept ignoring her feelings and Caspian was getting attracted to her new appearance, will they ever be able to find love in each other?

Being loved. All I've seen is how suffocating love can get. How it just makes me hate myself for being me and not a better me. He is not any different.

It’s funny how something happens that devastates you so deeply and your feelings for that person evaporate like smoke rings. I can do it too.&nbs……