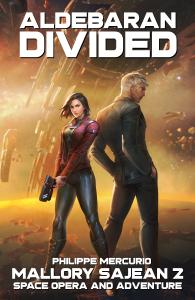 A city-planet orbiting a giant star. A perfect place for a bloodbath.
In the Aldebaran system, two alien species who have long coexisted are about to go to war. On behalf of the powerful Vohrn, Mallory Sajean is sent there to investigate...
As soon as she arrives, things start to escalate. A senseless attack on an ambassador, aliens and humans behaving strangely... Mallory begins to suspect a frightening truth: This looming conflict is really a cover-up for something much bigger.
Will Mallory and her allies save Aldebaran from destruction?
Aldebaran Divided is the second volume of the new MALLORY SAJEAN Science Fiction series. If you like Space Opera, action, exotic worlds and colorful characters, you'll love this story!
Read Aldebaran Divided and experience a breathtaking adventure!
About the author:
Philippe Mercurio loves to read science fiction. He is a huge fan of Jack Vance, Simon R. Green, and Frank Herbert. He also likes manga such as Battle Angel Alita and Gantz.
Mallory Sajean’s universe is a cross between Blade Runner and Star Wars, but in a unique way. If you miss TV shows like Farscape or Babylon 5, then this series is for you!
“I simply wrote the kind of stories I would love to read. My goal is to take my readers on a faraway journey that’s full of surprises.”

Diagnosis: Divided Personality, Acute and down-hill phase of the illness. The fear of men is a symptom of the illness and is not at all constitutional…. The prognosis must be reserved.